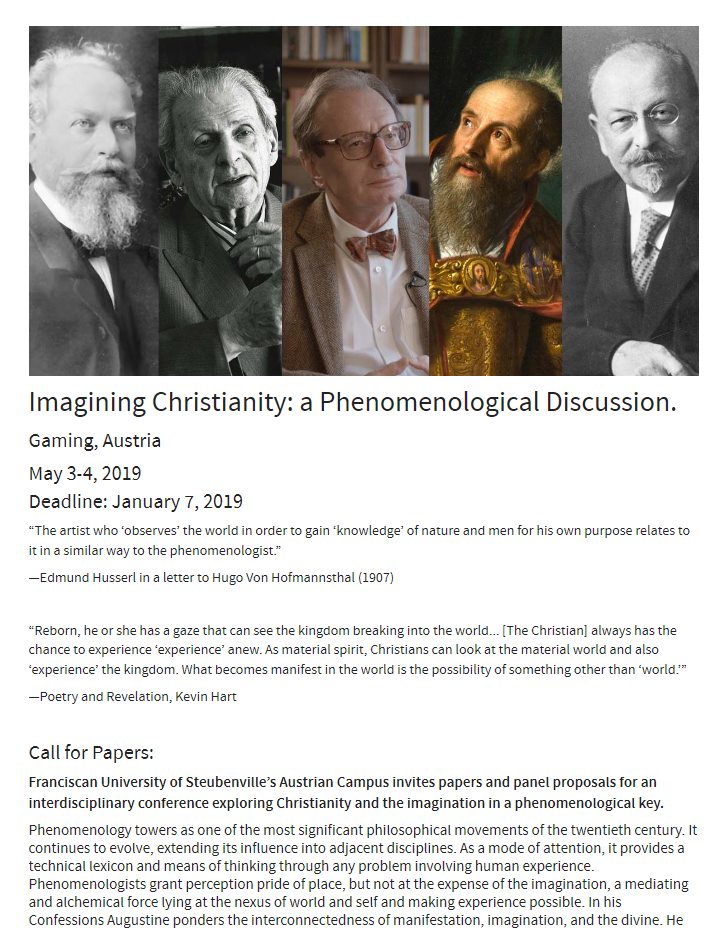 “The artist who ‘observes’ the world in order to gain ‘knowledge’ of nature and men for his own purpose relates to it in a similar way to the phenomenologist.”

—Edmund Husserl in a letter to Hugo Von Hofmannsthal (1907)

“Reborn, he or she has a gaze that can see the kingdom breaking into the world... [The Christian] always has the chance to experience ‘experience’ anew. As material spirit, Christians can look at the material world and also ‘experience’ the kingdom. What becomes manifest in the world is the possibility of something other than ‘world.’”

Franciscan University of Steubenville’s Austrian Campus invites papers and panel proposals for an interdisciplinary conference exploring Christianity and the imagination in a phenomenological key.

Phenomenology towers as one of the most significant philosophical movements of the twentieth century. It continues to evolve, extending its influence into adjacent disciplines. As a mode of attention, it provides a technical lexicon and means of thinking through any problem involving human experience. Phenomenologists grant perception pride of place, but not at the expense of the imagination, a mediating and alchemical force lying at the nexus of world and self and making experience possible. In his Confessions Augustine ponders the interconnectedness of manifestation, imagination, and the divine. He anticipates phenomenology’s central concern by 1,500 years, musing, “My question was the attention I gave to them and their response was their beauty.” Augustine then makes the enigmatic assertion that “human beings can put a question so that the invisible things of God are understood and seen through the things which are made.” This notion leads directly into his meditation on the “vast hall” of memory, a faculty that seems to encompass the imagination for Augustine: “Memory’s huge cavern, with its mysterious, secret, and indescribable nooks and crannies, receives all these perceptions, to be recalled when needed and reconsidered… But who can say how images are created[?]” Who indeed? And what is the relationship of these images to the objects they recall? To the spiritual realities to which they supposedly point? What does it mean to “put the question” so that objects gesture at realities beyond themselves? How does one attend to the supernatural through the natural? And finally, what role does the activity of the imagination play in supporting this mode of revelation? How does imagination assist the human person in receiving revelation as revelation?

Husserl articulated a theory of the imagination but was careful to separate the tasks of phenomenology from those of theology. Following in the wake of his teachings, however, the discipline turned swiftly to questions of religious experience. This is evident in the work of earlier figures such as Otto, Heidegger, and Stein, reaching its apex with the “theological turn” inaugurated by thinkers like Levinas and Marion. In recent years scholars have become increasingly interested in articulating a phenomenology of imaginative experience, especially as regards sacred things. Examples include the work of Robert Sokolowski, Kevin Hart, Cassandra Falke, Emmanuel Falque, and many others.

This conference joins that discussion. We welcome papers and panel proposals on any topic exploring the relationship between Christianity and imagination within a phenomenological key. We encourage and anticipate a wide variety of approaches to this subject. Papers might address the imagination from the angle of cognitive science, psychoanalysis, or other schools of psychological thought, considering what new phenomena these methodologies uncover. Contributions could also explore the rich but fraught relationship between art and faith, investigating such topics as icon-writing, iconoclasm, liturgy, drama, illuminated manuscripts, devotional objects, religious kitsch, architecture, literature, and so on. What does the field of theological aesthetics, enthused by phenomenology, have to say about the Christian imagination? What happens when minds without religious belief imagine Christianity? What are points of both contact and discontinuity between the imaginative productions of different faith traditions? Do they reflect or else flow from different roles entrusted to the imagination? How does the radical materiality of Christianity, emblematized by the Incarnation and the economy of sacraments, affect the way it can be imagined? What does the centrality of the Crucifixion mean for any kind of Christian aesthetic? What implication does the Second Person as Logos have for cultures of reading? What are the implications of Christ’s choice to teach using image-laden parables? What are the relationships between narrative, doctrine, and the gospel “genre”? What can be said about the Holy Spirit and imagination’s generative potential—perhaps especially as regards poetic inspiration? What does the sometimes riotous cult of the saints imply about the role of imagination within Christian devotion? How do dreams mediate religious revelation, and what role does the imagination play during such experiences? How does imagination color the contemplative tradition and its accounts of “mystical experience”? These are just some of the questions that papers on Christianity, imagination, and phenomenology might address. We are also interested in papers dealing more generally with the interface between imagination and revelation within the thought of key phenomenologists and theologians, as well as original contributions to the phenomenology of religious experience.

We are pleased to have Dr. Kevin Hart (University of Virginia) as our keynote speaker, whose recent book Poetry and Revelation: For a Phenomenology of Religious Poetry, does groundbreaking work in this field.

Please send paper abstracts and/or panel proposals to both organizers, whose email addresses are noted below. The deadline for submission is January 7, 2019, but earlier submissions will be accepted with participants admitted on a rolling basis. Final decisions will be announced no later than January 21. Participants who apply sooner can be informed earlier on a rolling basis. Paper presentations should not exceed thirty minutes. Ten to fifteen minutes of questions and discussion will follow each presentation.

The conference participation fee is set at EUR 270, and includes lodging for three nights at the Kartause Hotel (checking in on Thursday, May 2, and leaving on Sunday, May 5), all meals (including Thursday dinner and Sunday breakfast) as well as coffee breaks. Information on Vienna airport rides and train rides (to Scheibbs and Sankt Pölten) with associated costs will be offered as the event approaches.