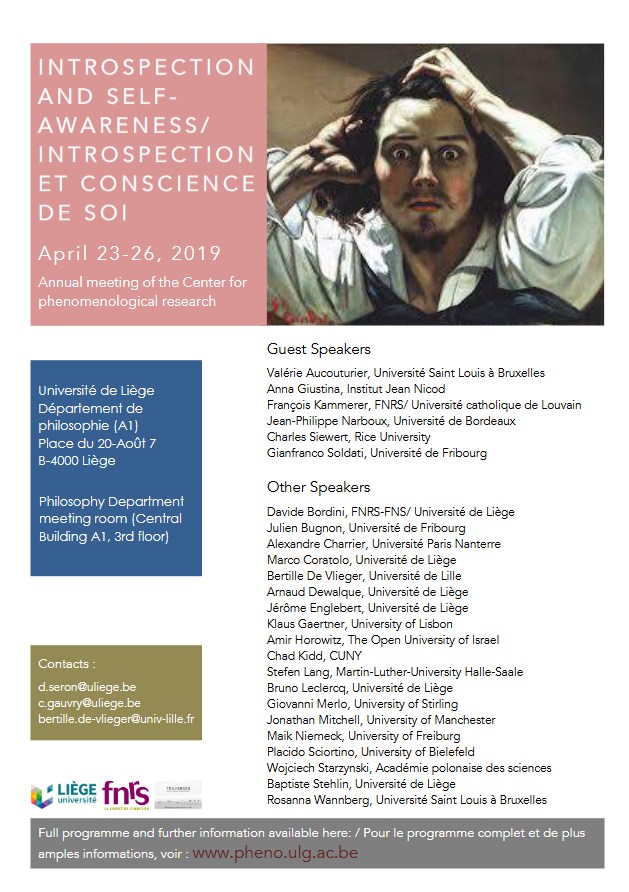 Our research center is organizing its 13th annual seminar, devoted to a central and recurring theme in the philosophy of the last two centuries: self-knowledge in the widest sense, including self-consciousness and introspection.

A crucial issue for both psychology and the philosophy of mind is how the subject can have access to her own mental life and acquire knowledge of it. Since the early 19th century this issue has given rise to numerous controversies which are still ongoing in the current literature and to which a wide range of phenomenologically-oriented philosophers have largely contributed. The aim of the seminar is to explore and discuss these debates, with a special focus on contributions from phenomenologically-oriented philosophers.

Systematic and historical contributions (e.g., on James, Wundt, the Brentano School, the Würzburg School, Husserl, Sartre, Wittgenstein, etc.) are welcome. For example, papers may engage with questions such as:

Proposals (title and abstract, maximum 700 words) are invited from senior researchers as well as graduate students, and must be sent via email to D. Seron (d.seron[at]uliege.be) and Ch. Gauvry (c.gauvry[at]uliege.be) by January 15, 2019. Please use only the electronic submission form (doc - txt).

The abstracts will be evaluated by the URPh board through a blind-review process. Acceptance or refusal will be notified at the end of January at the latest.