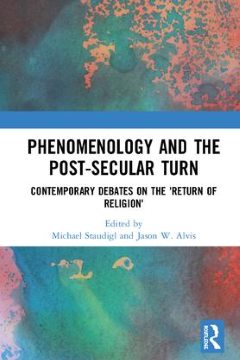 Phenomenology and the post-secular turn

contemporary debates on the "return of religion"

Are we living in a ‘post-secular age’, and can phenomenology help us better understand the discontents of secularism? From Habermas’ claim that the secular hypothesis has failed for democratic reasons to the fact that religion, far from its predicted dwindling, is as strong as ever (or even stronger than before), some have concluded that secularism as we know it is over. Others have questioned whether we have ever truly been secular, if the concept applies only to European societies, orwhether the very notion of religiosity is merely a weapon of pacification in the hands of Western universalism. The post-secular notion thus lingers between sociological fact and philosophical theory, and it is the latter that we need to investigate if we want to confront the challenges that any ‘return of religion’ entails. Although phenomenology has furnished manifold devices to rethink religious experience in a post-metaphysical way, its investigations often remain individualistic and beholden to unproductive dichotomies. This volume assembles investigations into secularism’s discontents by addressing religion’s role in forming the fabric of contemporary societies and unveiling new constellations of faith and reason beyond many beloved modernist dichotomies (e.g. theism/atheism, myth/Enlightenment, fundamentalism/tolerance) that often go under-investigated.

Phenomenology and the post-secular turn

How to overcome the world

Philosophical reflections on the shaping of identity in fundamentalist religious communities

On seizing the source

From mystery to laughter to trembling generosity

On secularism and its discontents