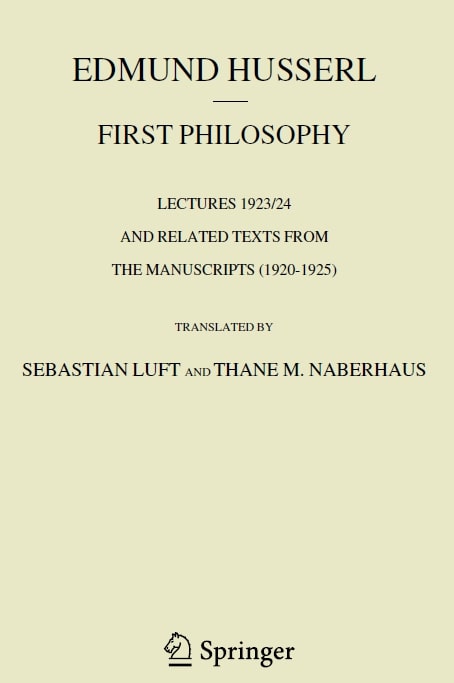 This volume presents, for the first time in English, Husserl's seminal 1923/24 lecture course First Philosophy (Erste Philosophie) together with a selection of material from the famous research manuscripts of the same time period.  The lecture course is divided into two systematic, yet interrelated parts ("Critical History of Ideas" and "Theory of the Phenomenological Reduction").  It has long been recognized by scholars as among the most important of the many lecture courses he taught in his career.  Indeed it wasdeemed as crucially important by Husserl himself, who composed it with a view toward eventual publication.  It is unsurprising, then, that First Philosophy is the only lecture course that is consistently counted among his major works.  In addition to furnishing valuable insights into Husserl's understanding of the history of philosophy, First Philosophy is his most sustained treatment of the phenomenological reduction, the central concept of his philosophical methodology.  The selection of supplemental texts expands on the topics treated in the lectures, but also add other themes from Husserl's vast oeuvre.  The manuscript material is especially worthwhile, because in it, Husserl offers candid self-criticisms of his publicly enunciated words, and also makes forays into areas of his philosophy that he was loath to publicize, lest his words be misunderstood.
As Husserl's position as a key contributor to contemporary thought has, with the passage of time, become increasingly clear, the demand for access to his writings in English has steadily grown.  This translation strives to meet this demand by providing English-speaking readers access to this central Husserlian text.  It will be of interest to scholars of Husserl's work, non-specialists, and students of phenomenology.

The idea of philosophy and its historical origin

The grounding of logic and the limits of formal-apophantic analytics

The historical beginnings of the science of subjectivity

The fundamental limitation of Locke's sphere of vision and its reasons

From Locke to the radical consequence of Berkeley's purely immanent philosophy

The rationalism and metaphysics of the modern period

The idea of apodictic evidence and the problematic of the beginning

Supplementations and clarifications in connection with the "objection of insanity"

On the theory of the theoretical attitude of the phenomenologist

The accomplishment and problematic of a phenomenological-psychological reduction

The philosophical significance of the transcendental-phenomenological reduction