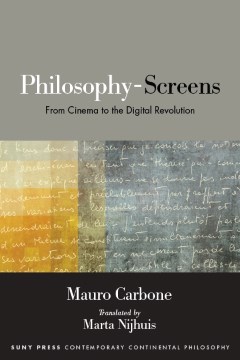 from cinema to the digital revolution

In The Flesh of Images, Mauro Carbone analyzed Merleau-Ponty’s interest in film and modern painting as it relates to his aesthetic theory and as it illuminates our contemporary relationship to images. Philosophy-Screens broadens the work undertaken in this earlier book, looking at the ideas of other twentieth-century thinkers concerning the relationship between philosophy and film, and extending that analysis to address our experience of electronic and digital screens in the twenty-first century. In the first part of the book, Carboneexamines the ways that Sartre, Merleau-Ponty, Lyotard, and Deleuze grappled with the philosophical significance of cinema as a novel aesthetic medium unfolding in the twentieth century. He then considers the significance of this philosophical framework for understanding the digital revolution, in particular the extent to which we are increasingly and comprehensively connected with screens. Smartphones, tablets, and computers have become a primary referential optical apparatus for everyday life in ways that influence the experience not only of seeing but also of thinking and desiring. Carbone’s Philosophy-Screens follows Deleuze’s call for “a philosophy-cinema” that can account for these fundamental changes in perception and aesthetic production, and adapts it to twenty-first-century concerns.