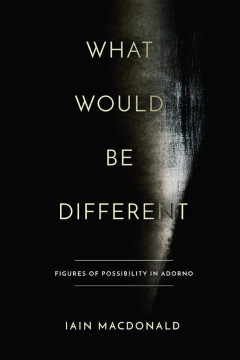 What would be different

figures of possibility in Adorno

Possibility is a concept central to both philosophy and social theory. But in what philosophical soil, if any, does the possibility of a better society grow? At the intersection of metaphysics and social theory, What Would Be Different looks to Theodor W. Adorno to reflect on the relationship between the possible and the actual. In repeated allusions to utopia, redemption, and reconciliation, Adorno appears to reference a future that would break decisively with the social injustices that have characterized history.To this end, and though he never explains it in any detail—let alone in the form of a full-blown theory or metaphysics—he also makes extensive technical use of the concept of possibility. Taking Adorno's critical readings of other thinkers, especially Hegel and Heidegger, as his guiding thread, Iain Macdonald reflects on possibility as it relates to Adorno's own writings and offers answers to the question of how we are to articulate such possibilities without lapsing into a vague and naïve utopianism.

Macdonald, I. (2019). What would be different: figures of possibility in Adorno, Stanford University Press, Stanford.