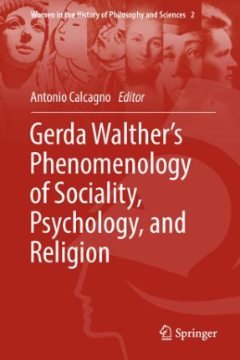 Women in the History of Philosophy and Sciences
vol. 2

This book explores the philosophical writings of Gerda Walther (1897–1977). It features essays that recover large parts of Walther’s oeuvre in order to show her contribution to phenomenology and philosophy. In addition, the volume contains an English translation of part of her major work on mysticism. The essays consider the interdisciplinary implications of Gerda Walther’s ideas. A student of Edmund Husserl, Edith Stein, and Alexander Pfänder, she wrote foundational studies on the ego, community, mysticism and religion, and consciousness. Her discussionsof empathy, identification, the ego and ego-consciousness, alterity, God, mysticism, sensation, intentionality, sociality, politics, and woman are relevant not only to phenomenology and philosophy but also to scholars of religion, women’s and gender studies, sociology, political science, and psychology. Gerda Walther was one of the important figures of the early phenomenological movement. However, as a woman, she could not habilitate at a German university and was, therefore, denied a position. Her complete works have yet to be published. This ground-breaking volume not only helps readers discover a vital voice but it also demonstrates the significant contributions of women to early phenomenological thinking.

The life and work of Gerda Walther

Social ontology and the self

The sense of mystical experience according to Gerda Walther

Phenomenological approaches to the uncanny and the divine