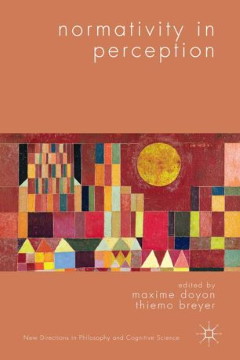 The normative force of perceptual justification

From a naturalistic point of view, the world may be seen as a set of physical entities that causally interact. Physical sciences precisely aim at explaining the world by discovering causal transitions between its constituent entities. Similarly, when it comes to the mind, philosophers of a physicalist persuasion typically attempt to account for the place of mind in nature by exploring causal transitions involving mental states. However, our mental life is not just made up of natural processes and causal chains. It involves rational transitions as well. Very roughly, saying that our mental life is also made up of rational transitions simply amounts to saying that, within the sphere of our mental states, some moves are justified while others are not. For instance, my belief that today is Wednesday, given the additional beliefs that school ends at 12 on Wednesday and that I have to go and pick up my children when school ends, doesn't just cause my belief that I have to pick up my children at school at 12. It is also part of what makes it rational for me to believe so.1