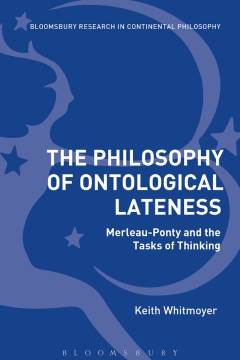 The philosophy of ontological lateness

Merleau-Ponty and the tasks of thinking

Addressing Merleau-Ponty's work Phenomenology of Perception, in dialogue with The Visible and the Invisible, his lectures at the Collège de France, and his reading of Proust, this book argues that at play in his thought is a philosophy of “ontological lateness”. This describes the manner in which philosophical reflection is fated to lag behind its objects; therefore an absolute grasp on being remains beyond its reach. Merleau-Ponty articulates this philosophy against the backdrop of what he calls “cruel thought”, a styleof reflecting that seeks resolution by limiting, circumscribing, and arresting its object. By contrast, the philosophy of ontological lateness seeks no such finality-no apocalypsis or unveiling-but is characterized by its ability to accept the veiling of being and its own constitutive lack of punctuality. To this extent, his thinking inaugurates a new relation to the becoming of sense that overcomes cruel thought. Merleau-Ponty's work gives voice to a wisdom of dispossession that allows for the withdrawal of being.

Whitmoyer, K. (2017). The philosophy of ontological lateness: Merleau-Ponty and the tasks of thinking, Bloomsbury, London.