This is a translation from Russian to English of Nikolai Onufriyevich Lossky's review of the first Russian translation of volume one of Husserl's Logische Untersuchungen (the "Prolegomena to Pure Logic"), which was translated by E. A. Berstein and published in 1909 by a Petersburgian editor. The review appeared in the Muscovite philosophical journal Pyccкaя мыcль (Russian Thought) in 1909. In this short text, Lossky expresses his agreement with Husserl's early anti-psychologism in logic. He also manifests his stance against logical and axiological relativism and naturalism. As an ontological realist, Lossky thought he had found in the author of the Logische Untersuchungen an ally against the subjectivistic trends then still prevalent in Germany. The review is significant in intellectual history for its vanguard role in the Rezeptionsgeschichte of Husserl's thought in Russia. (Frédéric Tremblay) 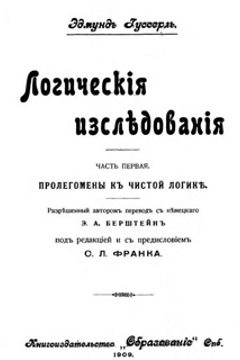