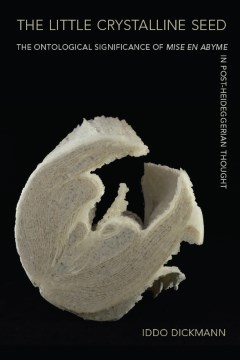 the ontological significance of mise en abyme in post-Heideggerian thought

Mise en abyme is a term developed from literary theory denoting a work that doubles itself within itself—a story placed within a story or a play within a play. The term flourished in experimental fiction in midcentury France, having not only a strong impact on contemporary literary theory but also on post-structuralist philosophy. The Little Crystalline Seed focuses on how thinkers invoke the concept of mise en abymein order to establish ontologies that deviate from that of Heidegger. Iddo Dickmanndemonstrates how the concept served in modeling Jacques Derrida’s logic of supplementarity; Maurice Blanchot’s mechanism of désouvrement; Gilles Deleuze’s philosophy of repetition; Emmanuel Levinas’s concept of “proximity,” and in further circuit: the philosophies of Bergson, Kant, Leibniz, Heidegger himself, and more. Exploring the interpretative and generative potential of the mise en abyme for continental thought, Dickmann reveals new points of resonance between various philosophical topics including, aesthetics, ethics, time, logic, mirroring, play, and signification.