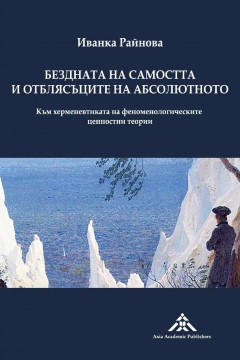 In her book "The Abyss of the Self and the Reflections of the Absolute. A Contribution to the Hermeneutics of the Phenomenological Value Theories", Yvanka B. Raynova shows how, after the end of the era of "absolute idealism", philosophy is falling into a sort of "identity crisis," which requires the constant rethinking of its essence as a specific type of knowledge, and also of its subject and method. As a result of the attempts to "save" philosophy, meta-physics was replacedby ontology, the absolute - by the attempts of an "open system" and/or integral thinking, and the place of the identity of truth, good and beautiful were taken by axiology. Consequently, notions as world, horizon, life, life world, self, alterity, and values became of crucial importance. In this context, the author argues several interrelated theses: Firstly, that in post-Husserlian phenomenology, especially in its French versions, a reinterpretation of the notion of "life world" based on Heidegger Being in the World is done, which turns in a sense against Husserl's transcendental justification of phenomenology. Secondly, this reinterpretation gradually leads to a departure from Heidegger's ontology towards the practical philosophy and axiology, respectively, towards the values denied by Heidegger. Thirdly, the living world becomes a crossroads between the problems of theoretical and practical philosophy, as it stands at the center of value discourse.