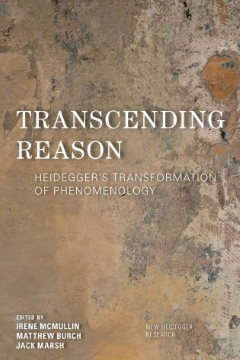 The received view of Martin Heidegger’s work is that he leaves little room for reason in the practice of philosophy or the conduct of life. Citing his much-scorned remark that reason is the “stiff-necked adversary of thought”, critics argue that Heidegger’s philosophy effectively severs the tie between reason and normativity, leaving anyone who adheres to his position without recourse to justifying reasons for their beliefs and actions. Transcending Reason is a collection of essays by leading Heidegger scholars that challengesthis view by exploring new ways to understand Heidegger’s approach to the relationship between reason, normativity, and the philosophical methodology that gives us access to these issues. The volume points to Heidegger’s novel approach to reason understood in terms of what he calls Dasein’s ‘transcendence’—the ability to occupy the world as a space of normatively structured meanings in which we navigate our striving to be. By examining the strengths and weaknesses of this new and innovative take on Heidegger’s philosophy, this collection considers the possibility that he does not sever but rather reconceives the relation between reason and normativity.