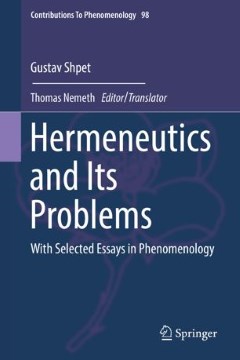 Hermeneutics and its problems

with selected essays in phenomenology

This book details a history of the methodology of textual interpretation from Ancient Greece to the 20th century. It presents a complete English translation of Hermeneutics and Its Problems, written by Russian philosopher Gustav Gustavovich Shpet, along with insightful commentary. Written in 1918, Shpet's text remained unpublished in its original Russian until the collapse of the Soviet Union. This engaging translation will be of value to anyone interested in early phenomenology, Russian intellectual history, as well as the divergence ofphenomenology and the analytic philosophy of language.

The volume also features translations of five key essays written by Shpet. The first presents an extended elaboration of a non-egological conception of consciousness on Husserlian grounds that considerably predates the well-known arguments of early Sartre and Gurwitsch. The second details the rudiments of a phenomenological philosophy of history that traces a central theme back to Parmenides. The next two reveal Shpet's abiding philosophical interest in combating skepticism and what he took to be the reigning neo-Kantian model by which philosophy is a handmaiden to mathematical physics. The final one features a terse statement of Shpet's overall philosophical viewpoint, written during the early years of the Stalinist period.

Shpet offers an example of one facet of philosophy from a phenomenological viewpoint, demonstrating the progress as well as the deficiencies of successive eras along the historical journey. In doing so, he also gradually reveals the need for a theory of signs, interpretation, and understanding. This collection brings together key documents for assessing Shpet's hermeneutic phenomenology and his perceived need to develop a phenomenological philosophy of language.

Špet, G. (2019). Hermeneutics and its problems: with selected essays in phenomenology, Springer, Dordrecht.

[Origin of the idea and of the methods of hermeneutics]

Flacius [and biblical hermeneutics in the renaissance]

Ernesti [and Ast: the reorientation of hermeneutics from theology toward philology]

G. Shpet, Hermeneutics and its problems