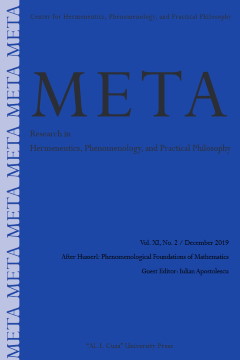 Several scholars support the view that Weyl's investigations have undergone many changes along his life. Among them, there is no common agreement, but many authors set an early phase connected with Weyl's adherence to intuitionism and a later phase usually referred as Weyl's symbolic constructivism. The paper aims to show that previous interpretations are reasonable though they miss the phenomenological framework in which they can be better understood. I will focus on some Husserlian issues that I think were overlooked in the literature. Husserl's distinction between descriptive and exact concepts delineates the difference between a descriptive analysis of a field of inquiry and its exact determination. Clarifying how they are related is not easy. Nonetheless, the proposed difference between descriptive and exact sciences does not exclude the fact that they might coexist as two correlated investigations in the same field of inquiry once we were able to establish a connection by means of some idealizing procedure intuitively ascertained. A uniform interpretation of Weyl's investigations is proposed within Husserl’s phenomenological framework, at least in the period 1917-1927.