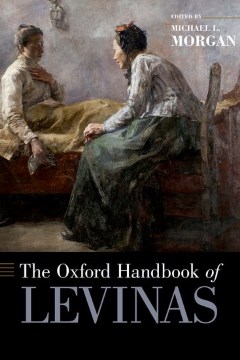 The Oxford handbook of Levinas

Emmanuel Levinas (1906-1995) emerged as an influential philosophical voice in the final decades of the twentieth century, and his reputation has continued to flourish and increase in our own day. His central themes—the primacy of the ethical and the core of ethics as our responsibility to and for others—speak to readers from a host of disciplines and perspectives. However, his writings and thought are challenging and difficult. The Oxford Handbook of Levinas contains essays that aim to clarify and engageLevinas and his writings in a number of ways. Some focus on central themes of his work, others on the ways in which he read and was influenced by figures from Plato, Hobbes, Descartes, and Kant to Blanchot, Husserl, Heidegger, and Derrida. And there are essays on how his thinking has been appropriated in moral and political thought, psychology, film criticism, and more, and on the relation between his thinking and religious themes and traditions. Finally, several essays deal primarily with how readers have criticized him and found him wanting. The volume exposes and explores both the depth of Levinas's philosophical work and the range of applications to which it has been put, with special attention to clarifying why his interests in the human condition, the crisis of civilization, the centrality and character of ethics and morality, and the very meaning of human experience should be of interest to the widest range of readers.