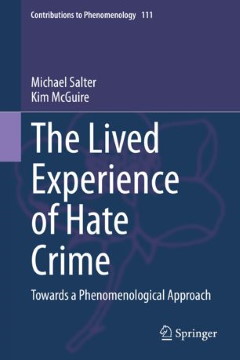 The natural attitude's objectivism as a type of closure

This chapter connects some of our earlier more descriptive analyses with an emerging critical stance that is more fully developed later during Part Two. In this chapter we characterise some of the distinctive effects of the natural attitude as including a form of cognitive closure and resulting exclusions of experiential aspects of hate crime. This is a highly prejudicial form whose operations tend to be self-fulfilling in the sense of a dogmatic and implicit form of self-validation that bypass expressly discursive justification. Going against the grain of such closure-by-exclusion, which is also exclusion-by-closure, we argue that it is vital to salvage what is excluded. Such a salvaging operation is needed to gain access to a mass of qualitative data, and thereby broaden out the source material of hate crime studies.