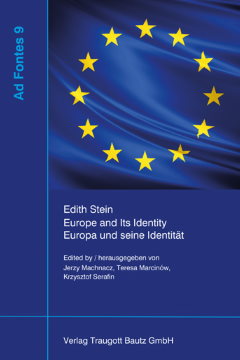 The work of Edith Stein – Saint Teresa Benedykta of the Cross – is part of the most powerful interpretative sources of the “European spirit”. The foundations of European identity are related to the philosophy of ancient Greece, Roman law and the ethos of Judeo-Christianity. All three pillars of European culture co-create the conception of the person and its inalienable dignity, the idea of human rights, civil society and the rule of law. This book explains in two parts the relevanceof Edith Stein’s work and moral patterns of life for the identity of contemporary Europe. The first part contains historical and philosophical-theological issues of Edith Stein’s creativity which offer a key to the problems of European identity. The second part is an attempt to explicate these issues in the context of diagnosing the current state of European identity.

Facing the challenges of the future of Europe

Widening the horizon of reason

Dignity of the human person as a basis of European axiology